About eight years ago our family went on vacation. One day, we all went ice skating, and my (then) eight-year-old daughter was just starting to learn some of the basics.  Soon after she hit the ice, she fell down. She came over to me whimpering “Mom, I fell.  I can’t skate!”  Struggling to find a response, I finally said, “You fell?  That’s fantastic! That means you’re learning! If you don’t fall, you’re not learning so much.” Surprised, she looked at me, and then skated away.

I eventually turned my attention elsewhere, and after a while she came back ecstatic. “Mom, I FELL AGAIN!”  Her face was beaming, and I congratulated her. “Oh, you must be learning a lot!”, I said. She skated eagerly away. A few falls later, she had succeeded in mastering a new maneuver on the ice.

Not long after that, I was working with a  group of senior leaders who were practicing their coaching skills. One coaching conversation was going unusually well. The coach very skillfully gave the coachee the space to discuss the challenge, and she encouraged him to weigh the pros and cons of the either/or decision that he was facing.  She even got him to reflect on the possible long-term impact of his decision on those involved.

Our time was limited, so at a certain point I gave the coach a two-minute warning. Suddenly, the conversation shifted gears, as the coach tried to move things forward more quickly, in order to get to a solution before the time was up.

During the debrief, the coachee said that he thought the conversation had moved from a very creative and enlightening exploration of the current situation, to a sudden rush to the finish line.  An uncomfortable silence followed, and I felt the same struggle to respond that I had experienced with my daughter. Then my mind flashed back to the ice rink.

“I am so glad this happened!”, I said. “Look at what we can learn.  Before our very eyes we have witnessed what happens when we rush to solutions instead of making the most of each moment. I am guessing that you all will be much more likely to resist the temptation to advise, because of having witnessed this conversation. Isn’t it better than any ‘words of wisdom’ from me?” They all agreed, and we launched into a rich discussion around how important it was to ‘go slow to go fast’ in a coaching conversation.

I believe that failure can be celebrated, as long as we learn from it. This is a new perspective for many coachees, and a gift that we can offer to them. Let’s celebrate! 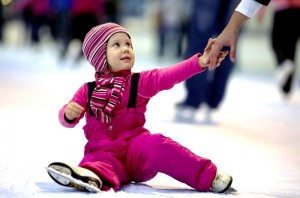