Should I Be Mean Now?

Ok, so I believe that it is important to assess intuitively where our coachees ‘are at’ in the first moments of each encounter. They can and do surprise us. And, their behaviors can sometimes overtake us.

A few years ago I was starting a new coaching assignment. The coachee and I met for the first time, and I felt that our discussion had laid the foundation for a solid coaching journey. At the end we summarized the conversation and our newly made plans for moving forward, and I asked for feedback as I often do.

He mentioned four or five positive things I had done and how they had helped the conversation. When I asked about what I could improve, he muttered something about ‘nice’ under his breath. I said “What?” and he replied, “You might be too nice.” I resisted the temptation to do something mean just to prove him wrong, and thanked him for his feedback.

The ‘nice’ feedback stayed with me all the way home, and it came to mind a number of times over the two months before our next appointment. It made me alert to receiving more ‘too nice’ feedback from other clients, but nothing of the sort was forthcoming.

When we met again, we shook hands, exchanged some niceties (no pun intended), and headed for the security gate. He motioned for me to go first at the same time that I was stepping back to make room for him. At the elevator it was basically the same story. Once in the room, figuring out who would sit where was an exercise in reciprocal deferral to the other’s wishes.

Finally seated, it dawned on me that I was unconsciously mirroring his behavior. I had been so busy interacting and reacting in like manner that I hadn’t taken a step back to look at what was going on with each of us, and between us. The guy was just, well, nice, so I was being nice back! And, if I’m honest with myself, I was also eager to please, in order to get the relationship ‘off to a good start’.

Once aware, I offered my observations to the client for reflection, and reminded him of his feedback from two months earlier. We were both curious about the connection, and agreed to loop back to it later.

As it turned out, his goal for the session was to present a tough message to an outspoken senior team. We role-played, and the ‘nice’ theme came up again, and in particular, how ‘nice’ behavior would work against him in this situation.

Later, we discussed how people could interact with his ‘nice’ behavior – some would enjoy it, others would take advantage of it, and still others, like me, might be nice back.

Yes, it is important to focus on establishing a positive working relationship with our coachees up front. Yet it is equally important to step back and observe what is going on between the two of you from the very first moment, as it may well contain valuable information. 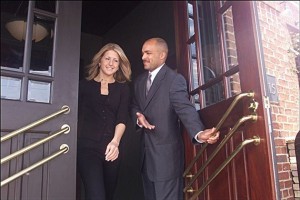