Recently, I observed a coaching conversation where the coach was working hard.

The coachee was sharing her frustration with a colleague of hers who would regularly interrupt her at team meetings. Coach and coachee explored a number of possible techniques for avoiding interruptions, and for managing the situation when she did get interrupted.

The ‘elephant in the room’ got bigger and bigger, and I was just waiting for the big powerful question to be put on the table. Finally it was.

The coach asked: “Why haven’t you spoken with your colleague directly about this?” But then she added: “Is it because you are afraid that he will brush it off as not important? Or deny that it happens? Or maybe you expect him to get defensive?”

What happened there!? The coach asked an open question but then immediately followed it with three closed questions that demanded a mere yes or no answer!

Open questions are intended to stimulate the creative and reflective juices of the coachee. In this case, not only did the coach kill the open question with closed questions, she reduced the coachee’s reflective process to a mere three options (although there must be a zillion). Furthermore, the coach did all the thinking to come up with these options. All the coachee had to do was select from someone else’s menu.

(Important aside: The options presented can infer a bias on the part of the coach.)

Here’s what happened next. The coachee replied, “Well, I don’t know. Maybe he’d get defensive. But that’s not quite it. What are the other two options again?” Then the coach struggled to remember and repeat them.

After spinning their wheels a bit, the coach circled back to the topic, taking a new angle: “What might happen if you spoke with your colleague about this directly?”

“Well, he’d probably interrupt me in that conversation, just like he does at our meetings,” the coachee replied, and then added, “And if he did, I don’t think I’d be able to manage the conversation successfully. [Pause] Then I’d feel like I’d failed…again.”

Bingo – a stand-alone, powerful open question! As you can imagine, there was plenty to explore from this one answer alone. And explore they did! In the end, the coachee left the conversation having created a solid strategy for moving forward, and the courage to do so.

The thought process created by being asked to choose from a menu of options is very different than that created by a powerful open question. When we ask an open question without a menu, we coaches can listen with interest and curiosity to what our coachees come up with all on their own.

Finally, if we do catch ourselves following an open question with a menu of options, we can get our coaching back on track by asking a stand-alone open question. 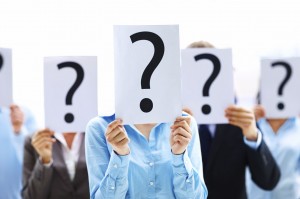