“So honey, I want to ask you a tough question, but I don’t want you to get all upset by it. May I? ” That’s all it took for mother and daughter to have a calm adult conversation.

What does this have to do with coaching?

Well, when coaching, I sometimes notice that I would like to bring something up, yet am not sure how to do so. I’m struggling – it is usually something I find difficult to say, something that I imagine might upset my coachee. It could be an observation, feedback, a challenge – anything really – yet it concludes with a question. And from my experience, the questions that are the most difficult to ask lead to the most meaningful client reflection. I call this ‘client gold’.

When I feel myself struggling like this, I look the coachee straight in the eyes, and ask: “May I?”

I am actually asking my coachee permission to say what is on my mind. It is a form of contracting on the spot – in coaching language. This usually piques the coachee’s curiosity, and it also gives them a moment to get ready for something unexpected. In fact, “May I?” is the coachee’s opportunity not to miss out on ‘client gold’, in spite of their coach’s struggle.

Situation:
I was coaching a leader who had the tendency to want to please, especially upward. She kept repeating that she would like to please her very demanding boss by saying ‘yes’ to a substantial project that would take a large chunk of her time for the months to come. I felt myself starting to take on some of the stress she was sharing. I said, “May I?” She replied, “Yes.” I continued with an observation: “You have expressed concern about work/life balance and confessed that you can’t sustain your current workload much longer. And yet now you are considering taking on this significant project without dropping anything else – all in order to please your boss. I’m concerned about you, wondering if this could be a set-up to a breakdown.” And then a question: “What if your boss will never be totally pleased?”

Gold:
This led to a fruitful discussion on making choices (and saying ‘no’ to some things), so that what she did say ‘yes’ to, she would do well. We also explored her desire to please, and how this might be driving her to make some poor decisions.

Situation:
My coachee kept saying that he didn’t have good intuition with people. However, within a few sessions I had heard several stories that showed how he used his intuition to positively impact people in the workplace. At a certain moment, I turned to him and said “May I?” He replied, “Yes,” and I challenged him: “I beg to differ! You say that you don’t have good intuition with people, but I’ve heard several stories [and I listed them] where your intuition was spot on!” And then the question: “What if you are wrong. What if people intuition is actually a core strength of yours?”

Gold:
The silence hung. After more discussion, he decided to give it a try, to listen to and act upon his intuition more often – to have more trust in his ‘gut’ feeling. He arrived at our next session absolutely ecstatic about his newly discovered strength – with a large handful of stories of successfully acting on his intuition instead of ignoring it.

Situation:
My stomach was going into knots. I was doing my best to listen to my coachee, but my mind kept wandering. This was NOT what I was being paid for! I finally even interrupted him mid-sentence, saying, “May I?” Surprised, he replied, “I guess, sure.” I shared my feedback. “One of your goals is to get people to listen to you more. You don’t feel listened to. I notice myself wandering off, and am quite upset by that. I’ve been trying to figure out why, and have concluded that while I find what you say interesting, I struggle with the monotone delivery.” And then the question: “Could this be related to what is happening at work?”

Gold:
This was a breakthrough for him, and we practiced (with and without recording and playback) taking a number of his sentences and injecting variable intonation.

May I … say one more thing?

When a coach makes that difficult observation and asks that difficult question, the conversation quickly goes to a deeper level, and a LOT more gets done. Implicit in this is the belief that the coachee is strong enough to hear it – from their coach – who believes in them and wants them to be at their best. Most are yearning for someone to be blatantly honest with them for a change, in a well-intended and non-judgmental way. Whether with your daughter or your coachee, “May I?” is gold. 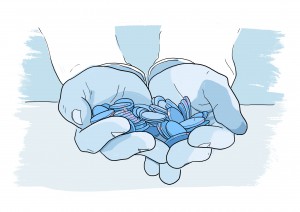